FRIDAY, May 20, 2022 (HealthDay News) — A growing number of U.S. teenagers are vaping marijuana — a habit that in some ways may be more risky than old-fashioned pot smoking, a new study finds.

Researchers found that between 2017 and 2019, the percentage of teens who reported any marijuana use in the past month ticked upward slightly — from 13.9% to 15.4%.

What really changed, the study found, was how kids were using the drug. There was a sharp increase in vaping, while traditional marijuana smoking declined.

The percentage of kids who said they vaped marijuana “frequently” — at least once a week — more than doubled, from 2.1% to 5.4%. Occasional use (one to six times a month) rose to a similar degree.

At the same time, the proportion of kids who smoke marijuana declined. In essence, vaping seemed to be replacing smoking, according to lead researcher Katherine Keyes, a professor at Columbia University Mailman School of Public Health in New York City.

She said she could only speculate about the reasons. But the rising popularity of vaping nicotine, along with legalization and changing social norms around marijuana, are likely factors, Keyes said.

Those points were echoed by Linda Richter, vice president of prevention research and analysis for the nonprofit Partnership to End Addiction.

She said past research offers some “compelling explanations” for the trends seen in this study.

“First, the wave of nicotine vaping that spread throughout middle and high schools over the past several years increased the likelihood that kids who vape nicotine will transition to vaping marijuana,” said Richter, who was not involved in the study.

Vaping, she added, has become “normalized,” while at the same time “pro-marijuana messages” have grown.

“Vaped products are also typically seen as safer and healthier than smoked products, because when e-cigarettes were originally introduced to the market, they were advertised as safer alternatives to cigarette smoking,” Richter said.

But vaping is far from benign. And when it comes to marijuana, Keyes said, vaping can actually deliver a higher dose of THC than smoking does. THC is the active ingredient behind marijuana’s “high.”

That higher THC dose, Richter said, can “hook young people to the substance and keep them coming back for more.”

And while vaping does not involve smoke, the liquids used in vaporizers do contain potentially toxic chemicals, Richter pointed out. Vitamin E acetate, an additive in some THC-containing vaping products, has been linked to severe — and sometimes fatal — lung injuries.

That lack of smoke is also a problem of sorts: Kids can conceal marijuana vaping more easily than smoking, Richter said, because there’s no telltale pot odor.

By 2019, marijuana vaping was more popular than traditional pot smoking among all racial and ethnic groups, except for Black teens.

Keyes also pointed to a finding from a previous study of the same group of teens: High school seniors reported an especially sharp rise in marijuana vaping — with the prevalence nearly tripling, from 5% to 14%.

The vaping craze presents parents with some difficult issues, according to Keyes and Richter. Not only is marijuana use harder to notice, but kids are also seeing marijuana vaping products marketed everywhere, including on social media, they pointed out.

“It’s not a matter of whether your child will be exposed to this, but when,” Keyes said. “The best thing parents can do is to talk to their kids about marijuana use, and start early — in middle school.”

Richter agreed, encouraging parents to take a “health rather than a punitive approach” to those conversations.

You may have missed 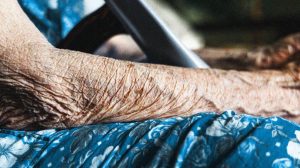 What do we know about this link?

How does anxiety affect men?